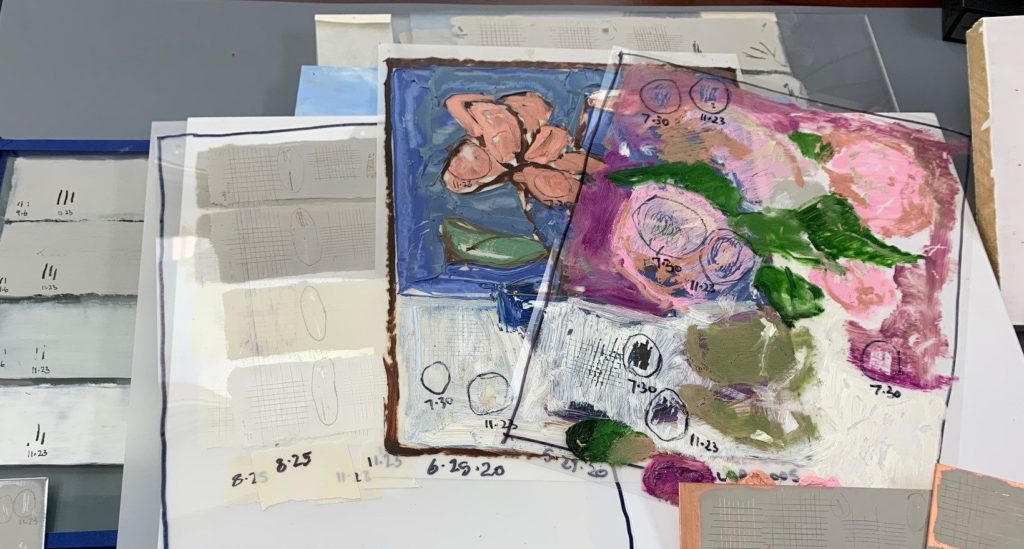 With the rising popularity of alternative painting supports such as Dibond®, aluminum panels, acrylic sheeting and polyester films, we wanted to create some initial testing focused on how well oil paints adhere to these and other non-porous substrates without any ground preparation. We looked at several types of substrates, scuffed and unscuffed, with a couple different oil paint applications. After applying the materials and waiting from one to six months, we performed cross-hatch adhesion tests and scratched at the surface, which led to some interesting results.

The substrate materials we tested are DiBond®, raw aluminum, copper, acrylic sheeting and polyester film – gloss and matte. Most of these supports, with the exception of the polyester film, were tested scuffed and unscuffed. For scuffing, we used 220 grit sandpaper to uniformly degloss the surface with horizontal, vertical and diagonal strokes. The metal substrates were cleaned with isopropyl alcohol and the acrylic sheeting was cleaned with soap and water, as isopropyl alcohol on acrylic sheeting can cause micro-cracks. The test paints were selected to represent some commonly used options for the initial layers of an oil painting. We used Williamsburg Titanium White with Italian Raw Umber mixed to a light gray, this same mixture thinned with odorless mineral spirits, Williamsburg Lead Oil Ground and Titanium Oil Ground. These applications were applied thinly so they could dry quickly and have the best chance to form a durable film. We also applied the paints over GOLDEN Acrylic Gesso as a control.

We used cross-hatch and surface scratching to determine adhesion on our non-porous substrates. For the cross-hatch test, we scored the oil paint into a grid pattern and attempted to pull the paint squares off the surface with tape. Since this traditional test did not reveal any failures in our samples, we tried simply scratching the surface with a palette knife and a fingernail to see how easily the paint would come off. This proved to be very revealing. It also has real world implications, as it mimics the effects of something grazing across the surface of a painting or scraping the surface with your tools during the painting process.

We tested adhesion after one and three months for all supports and after seven months on several others. In general, we found scuffing and cleaning the surface before painting provided a huge improvement in adhesion. We scuffed the DiBond®, raw aluminum, copper and the acrylic sheeting. On most of these substrates, the paint on top of the unscuffed section could easily be scraped with a fingernail or palette knife, but the paint applications over the scuffed area are holding strong, and only able to be lifted in a couple cases with very aggressive scratching. Likewise, we had much better results on the matte polyester film compared to the gloss one. For a control we applied the same oil applications to birch plywood coated with Acrylic Gesso and saw no adhesion issues.

DiBond® is a brand of aluminum composite material (ACM). It is made from a polyethelene core sandwiched between two thin sheets of aluminum with a baked-on polyester finish. It is very strong, durable and lightweight, making it a desirable rigid substrate for oil painting. In the image below, we scuffed the right side of the panel and degreased the entire surface with isopropyl alcohol. We performed the adhesion tests approximately one, three, and seven months after the paint and grounds were applied.

As can be seen on the test panel below, the scratches on the unscuffed side on the left are very apparent. Some of the random scratches are just from handling and stacking these panels in the studio. The titanium / raw umber mixture over this surface shows poor adhesion, as it was able to be scratched off after one, three and almost seven months of dry time. The oil grounds scratched off a month after the paint application, but after seven months of curing became fairly locked down. At that point, it required repeated scratching of the surface with a palette knife to reveal the glossy surface of the Dibond®. The adhesion of the oil grounds on the unscuffed surface seemed to be adequate.

As mentioned above, scuffing the surface made a huge improvement with adhesion. The paint applications on the scuffed surface to the right show almost no failure. Testing about a month after application caused some scratching and scuffs in the paint along the edge of the white / raw umber application. After three and seven months, that same application is completely locked down and no longer vulnerable. The oil grounds were slightly more durable and did not come off the scuffed surface in any of the scratch tests, thus showing very good adhesion.

There are many types of aluminum panels available today. Some are coated to protect the metal from oxidization and others are not. The panel below is an uncoated, aluminum honeycomb panel. Whenever using uncoated metals for painting, it is typically recommended to scuff, clean and prime the metal with a designated Direct To Metal (DTM) primer before painting. In this test, we wanted to see if oils had an issue adhering to this surface without priming. As was the case with the Dibond®, the unscuffed surface showed very poor adhesion after the application had dried for one month and remained vulnerable to scratching even seven months later. The scuffed side, on the other hand, performed rather well. There were some minor abrasions soon after the paint application, but after three months, most of the paint was locked down and did not easily scratch from the surface. The only exception was with the titanium and raw umber applications in the upper right of the scuffed section. This paint could be scratched off only in the diagonal direction, which coincides with the final directional scuffing on the surface. (We have included a detail of that area below.) This result was surprising and may have further implications about our recommended scuffing technique. Perhaps circular scuffing would be more effective. We will have to research this issue further. The oil ground applications did not show any issues with scratches that coincide with the diagonal scuffing.

Copper plates have been used as a unique and durable substrate since the first quarter of the 16th century. Most often, the ground on these early pounded and scuffed copper plates was a lead oil ground which was applied very thinly, likely to allow the glow of the warm color to influence the image. In our testing, a thin application also provided more durability against scratching in a shorter period of time than thicker applications. This is likely due to a thinner film curing faster and more thoroughly than its thicker counterpart. One of the benefits of copper is the ability of the metal itself to speed up the drying of the oil applications on the surface. In the image below, the unscuffed surface on the left shows some vulnerability to scratching after one and three months in the titanium and umber mixture, but shows no adhesion issues in any other applications. Likewise, the scuffed surface on the right shows almost no adhesion issues in any of the applications even after only one month. This support seems to provide the best result of all the substrates we tested for this article. Excellent adhesion.

There are many kinds of plastic sheeting available and some may perform better than others as a painting surface. For this test we used 1/8″ acrylic sheeting specifically. Some brand names of acrylic sheeting are Plexiglas® and Acrylite®. This material performed well when scuffed and cleaned. When prepared as such, the paint applications could be minimally scratched after one month and continued to improve after three. At that time, we were only able to minimally scratch through the paint down to the surface with aggressive scratching using the tip of the palette knife. As the image below shows, unscuffed acrylic sheeting has terrible adhesion. All the applications could be easily scratched from the surface at each stage of testing. Even the very thin oil ground applications can be scratched off with a finger nail.

Polyester films are more commonly known by their brand names of Mylar® and Dura-lar®. Like the other scuffed surfaces above, the matte polyester film provided superior adhesion to its glossy counterpart. While we did not scuff this polyester film, it seems the micro-texture of the matte surface helped to provide improved adhesion. But, there were still some issues. After one and three months, aggressive scratching with the palette knife was able to minimally break through all the paint and oil ground applications and reveal the surface. These applications could not be scratched off with the fingernail, but only with the tip of the knife, which is fairly aggressive.

The paint and oil grounds on the gloss polyester film were also tested one and three months after application. Unlike the mixed results on the matte polyester surface, the results on the glossy film showed very poor adhesion. The titanium and umber applications were easily scratched off, and the oil grounds, while slightly more durable, were still vulnerable to scratching with both a palette knife and the less aggressive fingernail.

Of the materials tested above, the scuffed and cleaned copper and Dibond® performed the best. The raw aluminum, scuffed acrylic sheeting and matte polyester film showed some vulnerability, but did rather well overall. The unscuffed acrylic sheeting and gloss polyester film failed and are not recommended. In general, it seems the thinner applications dried faster and had better adhesion than the slightly thicker applications. Thinner initial layers on non-porous surfaces are recommended. Even though some of these substrates performed well, there are some caveats to consider.  It is unclear if future oxidization of the metallic surfaces is possible or whether oxidization could  impact long term adhesion or the longevity of the paintings created on those surfaces. There are also aging characteristics of oil paints that are difficult to predict and are not readily apparent with this type of short-term testing. For this round of testing, we did not add any mediums – alkyd or regular drying oils, to the paint application, which is something we would like to do as a second installment to see if the mediums provide additional durability or a beneficial resistance to scratching. As always, we encourage your comments. If you have any questions, please do not hesitate to email help@goldenpaints.com or call 800-959-6543 in the US or 0049 (0)69-348-72-154 in Europe.

View all posts by Greg Watson -->