Home>Company> Events > Move over nice dog….Move It On Over, Hank Williams 1947 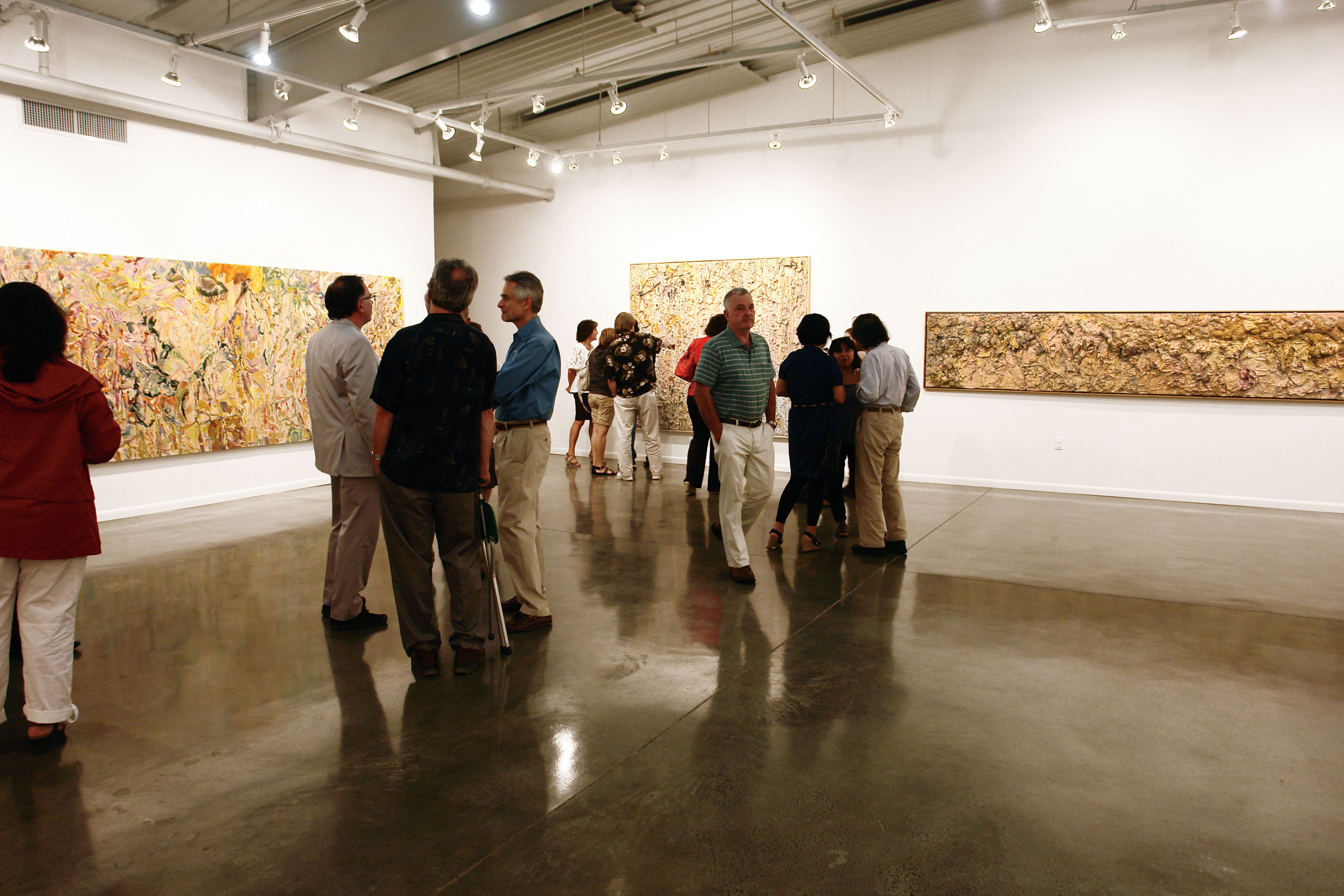 VELOCITY is a selection of Larry Poons paintings spanning from 1975 to 2009. VELOCITY is as close to a visit to the New York City studio of Larry Poons as many will get. In Poons.s studio, finished paintings ten deep or more are stacked, often according to size rather than chronology. VELOCITY brings to the viewer a glimpse of what such a studio visit might enable: wherein a painting from the 1970s might be next to one freshly painted. And against the opposite wall there might be paintings visible that fill in the intervening decades. This intended, or sometimes merely expedient, storage of his works in this way, delineate similarities and differences in the pictorial dialog that Poons’s paintings present to each other. VELOCITY brings the demiurges and eddies of the studio life to the fore.

Larry Poons as artist is forceful, engaged, relevant. During Poons’s five-decade painting experience he has made changes in the making and in the look of his art. Poons has not been easy on himself or his audience. With a half dozen discernible periods to his immersion in painting, Poons’s works can be a declarative challenge to the casual eye. And a challenge to an artworld that quietly insists that an artists. work have less tumultuous variations from period to period.

Much is made of Poons’s early study of music. In particular: symphonic, chamber and hillbilly music, about all of which genres Poons is willing to share his deep understanding for the edification of a listener. The reader is urged to avail him or herself of engagement with Mr. Poons on issues in music if ever possible. (And also query him about poetry, and the care of your internal combustion engines, about which topics you will be glad you did.) But Poons’s comparisons of Hank Williams and Beethoven underscore a unique embrace of the possible emotional and technical range of music. Music has such useful terminology for the composer, player and audience. Painting, try as it may, and for whatever reason, can fall short in the utility of description. Tempo and mood markings in music are practical and more purposeful than the abundant narrative glosses about painting. It can be argued that a Poons painting, like ‘P.D.’ of 1982, is ‘symphonic’, with its accumulation of interwoven ‘throws’ of acrylic paint. ‘P.D.’ pulses and engages the viewer with its large scale (93 ¾ x 183 ½) and with the intricacies of the small catchments of paint on the low relief of its surface.

As shown in VELOCITY, ‘P.D.’ as well as ‘Log Train’ 1985 and ‘untitled’ 1975, are of a signature series of paintings made in the wildly unconventional, nearly impractical manner of throwing buckets of liquid acrylic against a long canvas enclosure. In those years, Poons needed paint to feel the pull of gravity, declare itself, morph from liquid to solid in order to bring itself into being as a painting.

Thirty years later, in paintings like ‘20000 Miles to Gram Parsons’ of 2003 and ‘Mocha Dick’ of 2009, Poons returned to brushes. The vectoring of wet paint streaming down a canvas is gone, replaced by the appearance of finger-painting moving in any and all directions, untethered by gravity. Poons, being not in the least precious about his art (if a painting falls over, he has been known to assert ‘… just make sure to get out of the way…’), has stripped paint application down to the fundamentals.

In Poons’s art the seduction of throwing paint, heroic scale, the pouring and the orchestrating of paint are irresistible, but we are left with a primal fact. For Larry Poons, all of the changes, risks and achievements have been made in service to color. In the argument, as documented by Vasari, of ‘disegno e colore’, Poons, it seems, sides with the Venetians – color being all.