Home>Health & Safety > Will Cadmium Colors Always be on the Palette? (PART 2)

In our original article, which appeared in Just Paint Issue 4 (October 1996), we discussed the changing regulatory landscape concerning cadmium pigments, the potential for restrictions on their use in artist paints, and the suitability of potential alternative pigments. In this article we describe the process and results of an attempt to ban cadmium in artist colors in Europe, the reasoning behind it, and the response from both within the artist community and by those responsible for determining whether the ban would be implemented.

The countries of the European Union have instituted an impressive framework of regulations to protect their citizens from the exposures presented by the manufacture and use of consumer chemical products. This system is known as REACH, which stands for the “Registration, Evaluation, Authorization and Restriction of Chemicals”. REACH requires that each chemical manufactured within or imported into the EU above minimum quantities must be registered with the European Chemicals Agency (ECHA). This requirement applies to individual chemicals, rather than to entire “preparations”. For example, the Propylene Glycol in GOLDEN Acrylics is a chemical, while GOLDEN Heavy Body Acrylic paint is a preparation. The registration process includes requirements that the environmental impact and health effects of the chemical be evaluated. If incomplete information for a particular chemical exists, then the manufacturers and importers of that chemical are collectively responsible for obtaining the missing data. From this basis, chemicals of particular concern can be nominated by member states (individual countries) for restriction from use (i.e. banned) or nominated for authorization for only limited uses. It is ECHA’s mission to then opine to the European Commission whether to restrict or authorize chemicals upon careful consideration of their risk versus their socio-economic benefit. 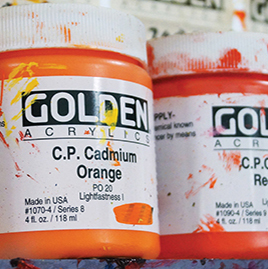 Cadmium pigments for use in artist paints came under this scrutiny in December 2013 when KEMI, the Swedish Chemicals Agency, submitted a proposal to ECHA that cadmium and its compounds should be restricted from artist paints. So long as such a proposal meets regulatory standards of completeness, it must be seriously considered by the Agency. This process of consideration involves two separate committees within ECHA. It is the task of the Committee for Risk Assessment (RAC) to summarize the risk to human health and the environment of the chemical in question and make a recommendation as to whether the proposed restriction is effective and necessary. The Committee for Socio-economic Analysis (SEAC) is tasked with evaluating the economic and societal impact.

KEMI contacted us during the development of their proposal and asked for comments regarding the feasibility and availability of organic alternatives to cadmium pigments, artists’ opinions on the acceptability of alternatives, and the proportion of the market comprised of cadmium pigmented colors. We replied that “there are no alternatives that match all of the characteristics of cadmium pigments” and expounded on this in detail. We also reported that cadmium colors comprise between 5 and 6% of total acrylic sales (slightly higher in oils) and that this proportion has remained relatively unchanged for the past 20 years. In their submitted proposal, KEMI concluded that alternative reds, orange and yellows exist, but that they could not be considered identical and that, should the proposal for a ban succeed, the individual user would need to search for a solution that suits their process. They acknowledged that a ban would be considered technologically feasible by some artists, but not by others.

KEMI based its opinion that risks outweigh benefits due to the statistical potential for adverse health effects resulting from the dietary intake of cadmium released during cleanup activities associated with painting. Most of the population in Europe is connected to public sewage treatment. When chemicals are washed down the drain, they travel to the sewage treatment plant and encounter fates specific to their physical state and resistance to environmental degradation. Solids, such as cadmium pigments, are collected in sludge, which is then commonly spread on agricultural land as fertilizer for the growing of crops. In the soil, cadmium pigments break down and the cadmium ion becomes available (along with naturally occurring and other sources of cadmium) for uptake into the growing crops and food system. KEMI’s proposal estimated that 5% of paint used by artists goes down the drain and banning it would eliminate 0.0081% of individuals’ dietary cadmium intake. They contend that this modest reduction would ultimately (after 150 years) result in 60 fewer bone fractures and 16 fewer cases of breast cancer annually across the European Union.

After KEMI’s proposal was accepted for consideration by ECHA, the next step in the process was their solicitation of comments regarding the proposed ban and the assumptions that formed its basis. With this came the opportunity for us to become a conduit for artists to provide information and other feedback to ECHA. A survey was created (designed with a neutral voice) to solicit feedback around two themes of the restriction proposal: whether there are suitable substitutes for cadmium pigments in fine art and to what extent artists avoid washing cadmium down the drain. The survey was circulated via direct email (artists were also encouraged to visit the ECHA website and submit comments directly). We received over 1,500 survey responses. While opinions were mixed regarding the suitability of other pigments to replace cadmiums, the vast majority of those responding commented that cadmium pigments are unparalleled in their combination of characteristics; notably excellent tinting strength, lightfastness, and opacity, earthy mixing characteristics and intense chroma. While in the minority, some artists replied they did not need cadmiums in their work and if a ban made the world a safer place, they would support it. The survey also revealed that the vast majority of artists avoid letting cadmium enter the waste water system, which calls into question the 5% assumption discussed above. Waste minimization practices reported included dry wiping brushes prior to washing, evaporating wash water, removal of wash water to household hazardous waste dropoff sites and treating the water in order to remove pigment prior to disposal (see Just Paint Issue 3). Every individual comment was forwarded to ECHA, along with a summary of the survey results. In its written opinion, ECHA’s RAC acknowledged this effort as a contribution of “meaningful information to the public consultation”. After careful consideration, the conclusion of both committees is that “the proposed restriction is not justified” due to the negligible risk it addresses. The final steps in the process are an additional SEAC comment period and report followed with a final decision by European Parliament, which we anticipate will follow the committee recommendations. 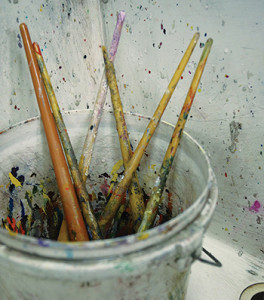 In our opinion, this attention to the subject of cadmium pigments only serves to underscore, rather than diminish the importance of their safe handling and use by the artist. We continue to advise that cadmium colors are not for use by children, should not be spray applied or sanded, and unless one is properly protected from exposure and in a non-household setting, use of dry cadmium pigment should be avoided.

We wish to thank everyone who participated in the survey. We were impressed with the number of responses and pleased to offer the data to ECHA which attests to your collective effort to minimize environmental impact.

View all posts by Ben Gavett -->