It’s all about a fear of water, the art of levitation, and the fact that size matters. From there it’s just an issue of context. Down one path are tales of summer pool parties and magic shows; down the other a world of pigment particles coaxed into fluid paint. Considering we are about to pull you in that direction, we likely have some explaining to do.

For most of us the world of fluid paints, airbrush colors and liquid inks form a continuum with only the most vague and fuzzy boundaries. After all, where does one group end and the other start? With just the smallest of tweaks the same color flowing through a brush or being atomized in the air can find itself being pushed through the dense felt tip of a marker or sliding down the narrow slit of a calligrapher’s nib. The paint being poured one moment might be called upon to make the most delicate and precise markings the next. Faced with this dizzying array of applications, it’s little wonder artists will often reach for different products at each turn. Acrylics however have always had a certain identity as a shape shifting, almost protean substance that could take on whatever properties were needed. And so the hope was always there for creating a magical middle ground, perfectly balanced between all these various tasks.

While High Flow Acrylics (HFA) are replacing Airbrush Colors, they are not simply a recasting or tweaking of that line. Built from the ground up, HFA are based on completely new formulations that use a different set of binders, a broader range of pigments, and come ready for use in a much wider scope of applications. At the same time, for the vast majority of the colors we were very careful to maintain the excellent sprayability that artists had come to rely on when using the Airbrush Colors in the past. That said, when wanting to explore some of the newer offerings that use fairly large pigment particles, such as the genuine iron oxides and mica-based iridescents, some adjustments to tip sizes and techniques might be needed. Please see the articles on High Flow applications in this issue, as well as the Tech Sheet on our website, for more details.

The main challenge in creating High Flow Acrylics was maximizing the dispersion and stabilizing the pigments in such a fluid system. Each pigment presented its own puzzle and required its own balancing act in formulating. Once a basic formula was in place, however, it still needed to pass a series of quality control and application testing to make sure it could perform at the highest possible level. It was not unusual for a color to go through 10-15 trials before meeting these demands. 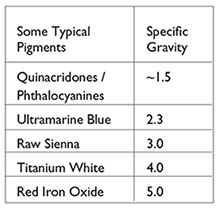 The first hurdle can often come as a surprise to most people. At some point, when working with a water-based system, the pigments will need to get wet. That much seems obvious. What is surprising is how many of these pigments are hydrophobic, meaning literally to have a phobia or fear of water. As if death by drowning topped their list of nightmares. To overcome this we use wetting agents and surfactants to lower the surface tension of water and act as a form of go-between; one end of their molecule being attracted to the surface of the pigment while the other is pulled outward towards the watery world that surrounds it. This allows water-based binders to flow more easily across the pigment surface while displacing any air; a process known as “wetting out”.

Breaking Up Is Hard to Do

Beyond the initial wetting, pigments need to be well dispersed in the binder. It is actually rare for pigments to exist at their smallest, primary-particle size since extremely strong inter-molecular forces cause them to stick together in various ways, initially forming tightly bound clusters of particles, called aggregates, which then form the building blocks for larger, more open clusters called agglomerates. Breaking these groupings apart requires the powerful shear forces of paint mixers and mills. While this allows the pigment to be evenly dispersed in the binder, and will increase tint strength, one needs to find ways to keep the pigments from regrouping, or even worse, from eventually crashing and forming a hard layer at the bottom. 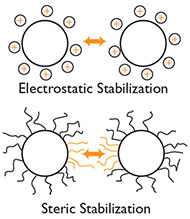 Getting particles that are invariably heavier than water to stay in suspension and not simply crash to the bottom of the container can seem like something just shy of the miraculous. This is especially true if you consider that the pigments we work with weigh ~1.5 to 5 times more than an equal volume of water; which is the same as saying that they are ~1.5 to 5 times more dense – a ratio known as a material’s Specific Gravity.

As if that was not bad enough, as pigments continually bump into each other they have a strong tendency to stick together in a process known as flocculation. These groupings then become increasingly heavy until they can no longer stay in suspension and drift downward. By controlling how that happens, one can make sure a paint forms loose, weakly bound clumps that are easier to break up and get back into a smooth, homogenous solution. This is basically why one is asked to “shake the paint thoroughly” before each use.

How pigments are kept apart and stabilized is based generally on two methods. One is electrostatic, where particles are surrounded by similarly charged layers (either positive or negative) and so repel each other, like magnets. The other is called steric, which involves adding polymers where one end is attached to the particle surface and the other branches out into the surrounding medium. They are structured in such a way that they are inhibited from coming too close to similarly treated particles, essentially creating a cushion or barrier. Picture a group of women in hoop skirts packed into an elevator, where even the best of friends will have difficulty moving closer together, much less embracing. In water-based systems it is also quite common to use both approaches at the same time, forming a combined electrosteric combination, which is the direction we took.

How Large Can Small Be?

While weight and forces of attraction present significant challenges, particle size by itself is likely one of the most dominant physical traits impacting both performance and formulation. The pigments we used ranged from carbon black and organics like Phthalocyanines and Quinacridones, with primary particle sizes of 1/10th of a micron and less, and aggregates up to 12.5 microns, to natural and synthetic iron oxides with primary particles of 1-5 microns and aggregates up to 25 microns, and finally mica-based iridescents which had the largest size at 60 microns. To put those numbers in context, 40 microns is the smallest particle visible to the human eye, while a human hair runs between 50-100 microns in width. 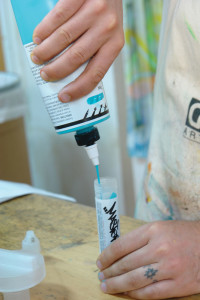 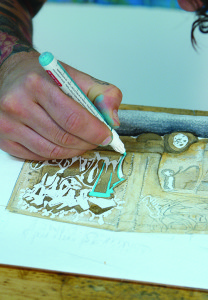 As pigments get smaller the ratio of their surface area to volume, as well as mass, goes up dramatically. For example, a one foot cube of marble has 6 square feet of surface area; divide that into quarters (or 3 inch cubes), and you now have 24 square feet of surface, or four times the amount, all the while keeping the same total volume. Continue the process until you have a fine powder and you will literally end up with millions of square feet of surface area to coat and contend with. As the amount of binder needed to wet out all those surfaces increases, choosing and balancing the various materials that interact or attach themselves to the surfaces of these particles, such as the surfactants we mentioned earlier, become an ever more critical part of the picture.

Going With the Flow

All the engineering behind the scenes, all the trials and the tweaks, really had just one purpose in mind from the start – to create a line of colors that flow and perform effortlessly, not simply through various tools and applications, but across the boundaries of painting, drawing, and spraying. It also brings the durability of the acrylic system, with all of its advantages and compatibility with other GOLDEN products, to the worlds of inks and airbrush colors. From all those vantage points, High Flow Acrylics is truly a new addition that creates fresh possibilities for expression.