It started innocently enough, the email slipping silently into the queue of our Inbox: “I was just wondering,” wrote the customer, “if there has been any thought of making a range of Munsell Neutral Grays in oil paints, similar to the ones in GOLDEN acrylics? I’m not holding my breath but this would be fantastic.”So the back and forth began, and by the time the emails died down a couple months later, more than 80 tubes of various Munsell Grays were being shipped to five different countries. But we are getting ahead of ourselves…

There are several things that Williamsburg Handmade Oils is known for: its range of colors, the differences in grind, an attention to detail and emphasis on small batch production or simply, the sheer sensuousness of the paint. But there is another aspect that takes place largely under the radar, and out of public view, which are the constant dialogs with artists searching for things they cannot find elsewhere, or with materials that possess some unique presence. Sometimes it is as simple as a variation on a current recipe; perhaps substituting a different oil or an alternate pigment, or simply formulating the color with a thicker or softer feel. Other times it means creating something wholly new, from the bottom up, inspired by the needs of an artist, or a fortuitous find of some scarce material. Each opportunity is a chance to learn as well as connect.

So there was nothing unusual about a request to formulate a few Munsell Grays, and we immediately offered to make them on a custom basis, with the attendant lead time and mixing fees. But the project quickly grew as the request made its way to Rational Painting ( http://rationalpainting.org), a well-regarded forum dedicated, among other things, to a Munsell-based approach to color. Could they order as a group? How precisely could we match the colors? Could the spectrophotometer be set to Illuminant C with a 2 degree observer, the standard that was used when defining the original Munsell swatches? Could they use Mars Black? Or perhaps Lamp? Ship to the UK, Germany, Australia? Who should sign off on the samples before going forward? And so it went, the questions at once helping to define the project while also expanding its reach. In the end the group settled on four Munsell values (N2, N4, N6, N8) ground in alkali-refined linseed oil and using a combination of Titanium White, Lamp Black, and small touches of various iron oxides (Burnt Umber, Burnt Sienna, Raw Sienna) to pull the otherwise too-cool mixtures back towards neutral. It was a balancing act that required great finesse on the part of the Lab, with the goal to always track as tightly as possible the spectral curves generated from an official, newly minted set of Munsell Grays.

As one can see below, the matches between the Munsell and Williamsburg Grays are nearly flawless as they stretch out across the spectrum, the slightest undulations animating the otherwise flat uneventful lines. The fact that any attempt at Munsell equivalents are constantly compared to such an exacting, universal model is one of the things that sets these colors apart. There is absolutely no wiggle room or poetic license here. Rather, the Munsell Grays are meant to form an objective and known scale that any other color can be measured against. Incorporated as a part of one’s palette, or system of mixing, they can allow a painter to adjust a color’s chroma in a repeatable and precise way that is simply not attainable otherwise. 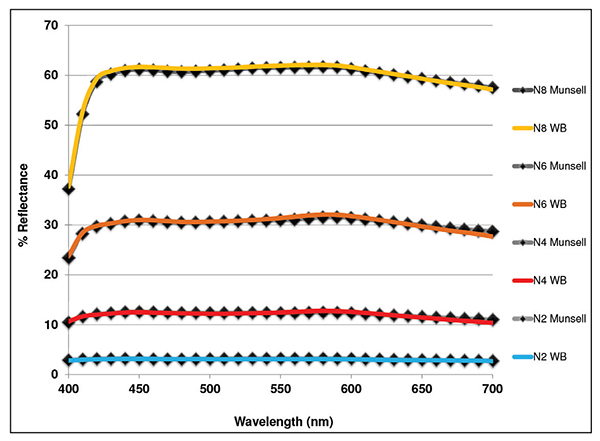 In the distant past many of the unique colors that were born from similar dialogs or discoveries would be taken down to Williamsburg’s own store in Manhattan and placed in boxes near the front, where painters could pick through the various odds and ends. After the store closed, in the late 90’s, they could still be found for many years on the Web site. Today, after a long hiatus, Williamsburg is excited to revive this tradition and to introduce these four Neutral Grays (N2, N4, N6, and N8) as our first Special Edition colors. Available only in 150 ml tubes, they can be purchased through the Williamsburg online store, as well as at select retailers. For further information please call Customer Service 800-293-9399 / 607-847-8843, or visit williamsburgoils.com.