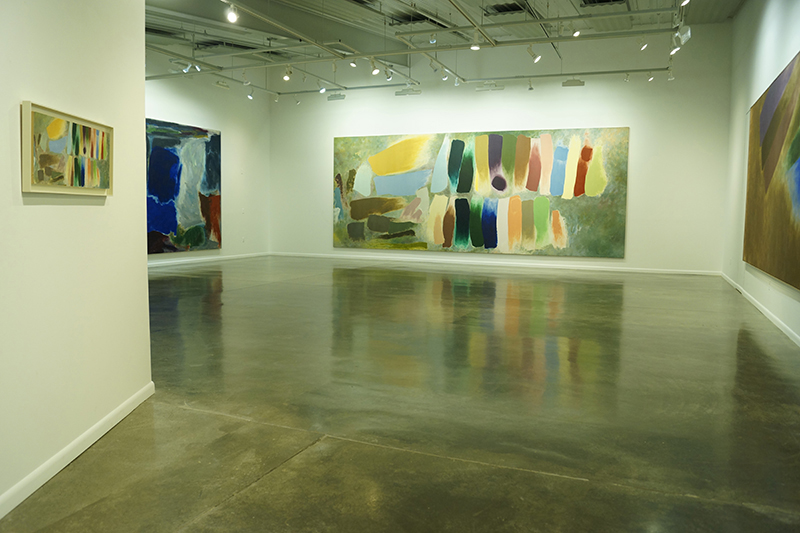 By the middle of the twentieth century the traditional notion of the artists studio, that of the ‘garret’, gave way to the availability of spacious commercial lofts in downtown New York City that had been abandoned in the post-war period. As manufacturing moved out of New York, artists moved into these spaces. Easels were dispensed with as painters utilized these vast studios by stapling canvases directly to the wall, or, as they had learned from Jackson Pollock, tacked canvas directly to the floor.

The New York School coalesced as expatriate artists fled Europe and American artists traveled to New York from all over the United States.

The threads of spontaneity, immediacy and directness gleaned from the ascension of Abstract Expressionist painting came together to create innovations in scale, spreading of color and signature styles of painting. In this milieu, Friedel Dzubas was among the notable artists who challenged themselves by engaging large scale in their art. Frank Stella, Larry Poons, Jules Olitski, and Al Held were among his contemporaries who were able to work in gradations of scale from the intimate to the monumental.

In the 1950’s, Dzubas was painting energetic abstractions with oil paint and he was included in early pivotal shows of the downtown artists such as the Ninth Street Show of 1951 and the follow up Stable Gallery Exhibition.

Our exhibition at The SAGG entitled ‘Friedel Dzubas Monumental Works’, on view from September 13, 2014 through March 28, 2015, features several large-scale paintings nearly ten feet tall and over twenty feet wide. These works represent an important benchmark of Dzubas’s achievement in terms of his grappling with the physical limitations of a ‘portable’ painting, a painting that can be disassembled and rebuilt for exhibitions. The large scale of these works puts as much pressure on the available space of gallery and museum walls as much as they did on Dzubas’s ability to make them. As large as the Dzubas paintings in our exhibition are, his largest work ‘Crossing’, which hung in the Shawmut Bank in Boston for many years, is an astounding fifty-seven feet long.

Somewhat in opposition to the typical practice of the painters of the post war period, Dzubas made small studies in advance of painting larger works. The SAGG has the good fortune to be able to include the study that Dzubas made for one of his large works entitled ‘Procession’ featured in the exhibition. The ‘Study for Procession’ is 13½ by 31 inches while the fully realized ‘Procession’ is twenty-four feet long. Both works are made with Magna mineral spirit acrylics. Magna was developed in the late 1940’s by paintmaker Sam Golden at his company Bocour Artist Colors. Magna was the first acrylic available for artist use and mixed with mineral spirits, not with water. Jackson Pollock was among the early adopters of Magna.

The original Magna paints, and after 1980, the Mineral Spirit Acrylics manufactured by Golden Artist Colors, Inc., afforded fast drying, luminous color and a distinct advantage for Dzubas, who would apply these paints onto a lean gesso surface that had been saturated with mineral spirits. This enabled Dzubas to feather out the edges of his multiple dense color areas enabling his signature surfaces. The choruses of these distinctive shapes populate his paintings and allowed him to provide pictorial resolutions that were wholly original within the architecture of the rectangle.

Our exhibition ‘Friedel Dzubas Monumental Works’ looks back to a time when the process of art making was wildly optimistic and open-ended. Dzubas took his painting across a gamut of scale relations and expressive potentials. It’s wall-to-wall painting, you can’t help but be immersed within.